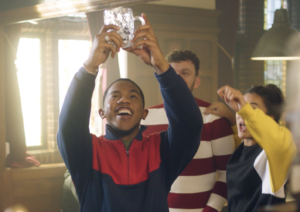 Three new films are being released, based on the award-winning #matesmatter campaign, which last year had the biggest shift in over a decade in young people’s attitudes towards drink driving.

One of the films sees friends in a pub intervene when a man picks up his car keys after he has been drinking, kicking the keys around the venue before they’re taken away by the landlady, who calls for a taxi. Another shows a couple kissing, ignoring everything around them until a man picks up his car keys and goes to leave. The couple break the embrace and the boyfriend kisses the man as the girlfriend takes the keys, and says “Someone’s getting the bus home.”

Our hard-hitting THINK! campaigns have already shown a positive impact on road users, encouraging safer behaviour so as to reduce the number of people killed and injured.

This festive season, the simple message is that friends need to step in and stop their friends from getting behind the wheel after drinking.

A recent RAC survey showed more than two thirds of people would urge their friend not to drive if they thought they were over the limit. This THINK! campaign provides simple solutions to encourage 18 to 24 year-old men to step in if they see their friend trying to drive home after drinking any alcohol.

The films will be broadcast online and on social media during the Christmas and the party season as well as at football grounds, on Spotify and in pubs.

Drink-driving wrecks lives and we would encourage every driver to consider whether they really want to take the risk of mixing alcohol with being behind the wheel this Christmas.

Regrettably, we have seen the number of people who admit to having driven while over the limit increase by 50% in the past 12 months from 8% to 12% so we welcome this hard-hitting campaign. It delivers a strong message that drink-driving is not acceptable, and also encourages people to speak up if they see their friends doing it.

Driving under the influence of drink or drugs is an incredibly dangerous and selfish decision to take, and it can have devastating consequences on people’s lives.

Far too many people still attempt to drive under the influence and we are better prepared to catch them than ever before. We will ensure that they face the full penalty of law.

Our message is the same all year round: do not do it.

The Department for Transport has also today announced the winners of stage 1 of the competition for new mobile breathalysers, in conjunction with the Parliamentary Advisory Council for Transport Safety (PACTS).

These breathalysers will enable police officers to test drivers instantly at the road side, saving police time as well as getting drink drivers off the roads immediately as they won’t have time to sober up on their way to police station.

The winners are Lion Laboratories and Intoximeters: companies that produce instruments to test alcohol on the breath. Their designs will now go be submitted for Home Office testing, with a view to being ready for 2020.

In addition stage 2 of the competition will now be open for bids from manufacturers who are able to provide devices for police forces for trials.