Motorists using a phone while driving will receive 6 points on their licence and a £200 fine.

New drivers face losing their licence if they use their phones at the wheel under tough measures coming into force today (1 March 2017), warned Transport Secretary Chris Grayling.

Motorists using a phone while driving will receive 6 points on their licence and a £200 fine – up from the previous 3 points and £100 penalty.

Motorists caught using their mobile twice or accruing 12 points on their licence will face magistrates’ court, being disqualified and fines of up to £1,000. New drivers, within 2 years of passing their test, risk having their licence revoked and lorry or bus drivers can be suspended if caught.

Our message is simple and clear: do not get distracted by your mobile phone while driving. It may seem innocent, but holding and using your phone at the wheel risks serious injury and even death to yourself and other road users.

Doubling penalties will act as a strong deterrent to motorists tempted to pick up their phone while driving and will also mean repeat offenders could find themselves banned from our roads if they are caught twice.

Everyone has a part to play in encouraging their family and friends not to use their phones while driving – it is as inexcusable as drink driving. 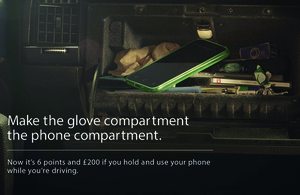 Police forces across the country will be taking part in a week’s enforcement from 1 to 7 March. This will see extra patrols and an increased focus on cracking down on people using their phones while driving. About 3,600 drivers were handed penalties in the last co-ordinated enforcement week from 23 to 29 January this year.

The government has launched a powerful and thought-provoking THINK! campaign to warn drivers of the new penalties and the dangers of using mobiles while driving. The campaign will see adverts on billboards, radio and social media as well as a hard-hitting video in cinemas, which was developed in partnership with The AA Charity Trust. Stickers and other in-car merchandise that encourage motorists to put their phone away and out of reach while driving will be distributed through partnerships with driving schools and car rental companies.

Britain has some of the safest roads in the world but the government is determined to make them safer. The Department for Transport announced in 2015 it was exploring whether to increase the penalties for using a mobile phone while driving. This received almost unanimous support during last year’s consultation. The Ministry of Justice has recently finished a consultation on increasing the maximum sentence for causing death by dangerous driving from 14 years to life imprisonment in an additional crackdown on reckless drivers.

These new penalties reflect the seriousness of the offence and will strengthen the deterrent against using a mobile phone at the wheel. We need people to understand that this is not a minor offence that they can get away with.

Across this week officers will continue to use innovative and intelligence-led tactics to catch and penalise people who are driving while distracted by a mobile phone. However, this is an attitudinal problem that we cannot simply enforce away by putting more officers on the roads.

This issue has to begin with personal responsibility by drivers. We know that people are more likely to report other drivers using a phone than to view themselves as guilty of it. That has to change.

Tougher penalties are a step in the right direction, but police forces and partners are working this week to make it socially unacceptable to use a mobile phone at the wheel. It’s about more than what you might have to pay as a penalty – you could hurt or kill an innocent person on the roads by checking a text or taking a call.

Don’t do it – and don’t let others take the risk either.

Too many drivers are addicted to their phones. Half of young drivers can’t bear to turn them off in the car. If they don’t switch off their phones they could lose their licence with the new 6 penalty points.

We need to break this addiction and the best way is for drivers to go cold turkey – turn off the phone and put it in the glove box. We are delighted THINK! will be supporting our radical new advert and believe it will begin to make text driving as socially unacceptable as drink driving.

Our latest report on motoring highlighted that the use of handheld mobile phones is at epidemic proportions and sadly the attitudes of many drivers have relaxed towards this illegal and dangerous activity. The new tougher penalties will therefore be welcomed by law-abiding motorists as a better deterrent.

The change in the law is one important step in helping make using a handheld phone at the wheel as socially unacceptable as drink-driving. The fact that it is joined by a new high profile THINK! campaign which will also focus on the dangers of using a handheld phone when driving, targeted enforcement by the police to let offenders know they will be caught and the RAC’s BePhoneSmart.uk ‘make a promise’ website, means there is now real momentum in getting drivers to change their behaviour for good.

The new penalties come into force in England, Scotland and Wales.

Members of the public can report repeat offenders to Crimestoppers, anonymously, on 0800 555 111 and information will be passed on to police forces. 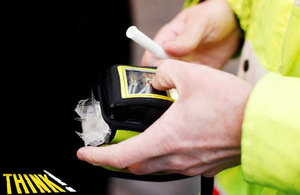